Just in time for Game Developers Conference 2017, here is the latest greatest release of the SkookumScript Unreal Engine 4 Plugin! 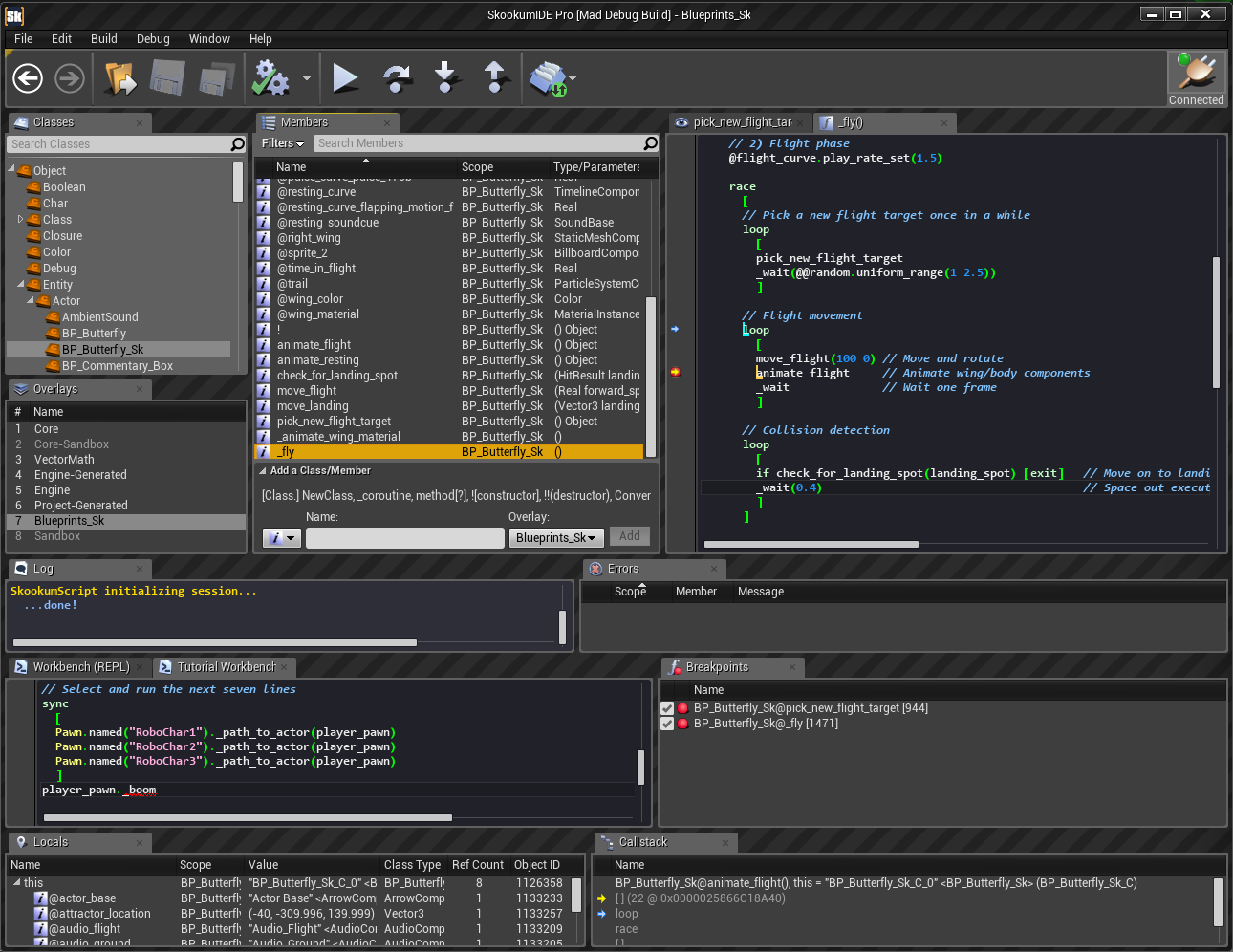 Our IDE went into metamorphosis and turned into a beautiful butterfly! Using Unreal Engine’s Slate UI system, we have redesigned it from the ground up for the sexiest, most superpowered workflow ever. And the good news is this new crown of game scripting UIs remains free for everybody in its Standard Edition. The Pro Edition is $99 until March 31, $199 after that. Check it out!

You can get the Pro version using the “Go Pro…” button on the Standard version to upgrade or you can buy a SkookumIDE Professional license directly.

Here are the most notable features:

How to get it?

Let us know if you have any questions!

Sounds Great.
I am slightly confused about the “Pro Edition Licensing”.

Would you guys tell me “where” the BUY Button is please??? I just can’t seem to find it! LOL

Also…
Can I buy more than 1 license at that price in case I want to grow the team later?

O and 1 more question… Will the IDE work on older versions of UE4 + SK?

Would you guys tell me “where” the BUY Button is please?

Just press the “Go Pro…” button and follow the instructions.

Can I buy more than 1 license at that price in case I want to grow the team later?

Sure, we haven’t placed any limits.

O and 1 more question… Will the IDE work on older versions of UE4 + SK?

So far we have updated UE4.13 - UE4.15 and we might update older versions depending on demand.

I would like to suggest that you have a Menu Item in your Main Website that allows you to buy as well.

I would like to suggest that you have a Menu Item in your Main Website that allows you to buy as well.

We’ll definitely be doing that. We are just rolling it out quickly to be in time for the Game Developers Conference.

We have to release it earlier on GitHub for Epic to include it in their Unreal Marketplace. [Even so they might be too busy with their own GDC prep to get our latest up on the Marketplace in time for GDC.]

Thank you for this! I’ve only had a quick play with it so far, but I’m loving all the improvements - really excellent work.

The filterable/searchable class and member/function lists are incredibly useful, and the tabbed editor windows also speed things up a lot. And (at least compared to last version I tried) much faster compile times to boot.

I can only imagine that as I incorporate more

in to my project the value of all these improvements will improve exponentially.

My only query at this stage, is it possible to increase the font size? The default is a fair bit smaller than what I’d normally use.

Thanks for the kudos

My first impression is quite favorable! I haven’t done anything more than a few updates yet, but this IDE is a vast improvement on the previous one. And how the heck did you make the compilation so much faster?? Did you figure out how to slip into another dimension with faster time flow and do it there? It’s instantaneous on my i7 desktop. Pat yourselves on the back because you knocked this one out of the park!