I just want to fire an event inside a Widget blueprint. I can access the widget class from the SkookumScript. What I have tried is calling on clicked event of a button inside the constructor of the Widget. 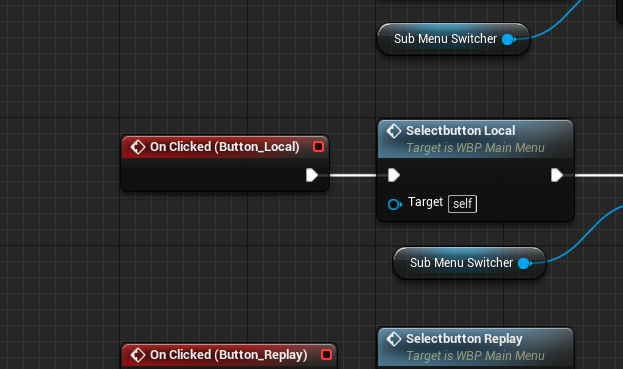 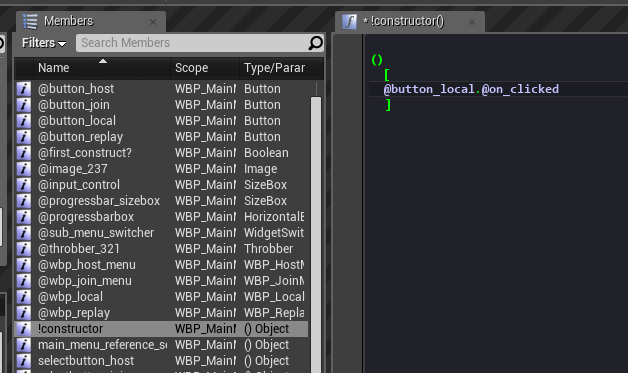 Currently it does nothing. I am sure my syntax is wrong. If you could give me some reference on how to do it, it would help me a lot. Thanks.

Help me understand what you’re trying to do here.

The code you showed:
@button_local.@on_clicked is just referencing a local @on_clicked variable but won’t result in calling anything. OnClicked is a delegate and there currently isn’t a way to call the delegate directly. But you can call functions.

Since I think you’re attempting to do #2, I’d recommend making a BP function in your widget blueprint, for example SelectButton. And make whatever calls you need to in the SelectButton BP function. Then in your local

Also your constructor named !constructor is something I have not seen before, as constructors are typically just named ! in

. One last thing to be aware of, widget’s can get constructed outside of an actual game world existing, so if you ever get a crash inside a constructor because some object doesn’t exist, remember me mentioning this.

Yep I am trying to do #2. Thank you for this great explanation. I’ll try this.

No problem, let me know how it turns out for you. I’m currently spec’ing out some tutorial content and have added a UMG example to my list that covers #1 and #2.

So I got it working by creating a Custom Event inside the Blueprint Widget and connecting it to the flow of blueprint nodes and then calling that Custom Event from SkookumScript.