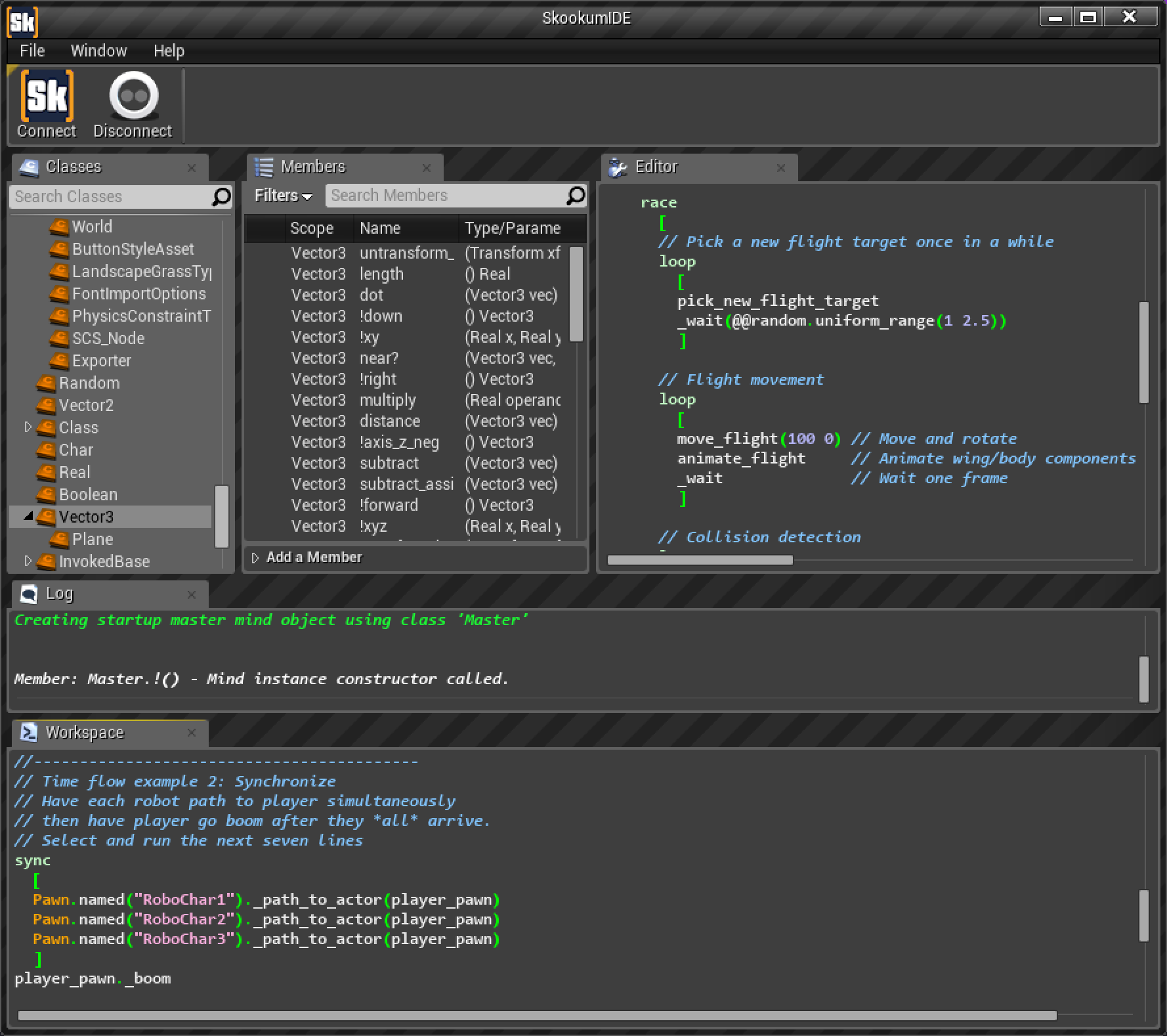 We are working on a revamped SkookumIDE using the same Slate user interface system used by the Unreal Engine 4 editor.

It will allow us to make much more sophisticated authoring, analysis and debugging features. It will also pave the way to the SkookumIDE being on multiple platforms - it will initially be available for Windows PC, then Mac OS/X and then Linux.

This will also enable us to fix several existing problems in the current SkookumIDE such as slow typing when an edit box has lots of text. It should also be able to better handle non-western character sets.

Hey Josh, glad that work around was successful. We haven’t replicated the problem exactly but do suspect the syntax highlighting is the slow down cause. The current beta build of the SkookumIDE on github now includes several new switches in the View menu. Others who encounter a similar slowdown of character input. Please post a note here or in the Mantis bug database and whether this work around makes a difference. Thanks, Josh!

Expect the first release this fall.

4 Likes
How To Learn The Syntax
Slow character input
What was the ide made with?
Supercharge Unreal Engine 4.11 with the latest SkookumScript plugin for it - 3.0.2391 Beta is out!
Any Information on New IDE
List of IDE Keyboard Shortcuts
Workspace Workflow
Browser Members Windows
Skookum IDE on Linux - Workflow?
Plugin folder location on a mac?
SkookumScript games now supported by Mac OS X
TONYBLU331 March 20, 2016, 7:08am #2

Looks Amazing and now really feels like it is fully integrated with Unreal and it everything is done correctly every developer will be working only with Skookum Script not with another scripting language unlike Lua.

Indeed! Can’t wait to try it out.

Since it is now no longer spring how are things going with the new ide?

Not that spring is a magical timeframe for the new IDE, though technically the last day of spring is June 19 and the first day of summer is June 20 - see the [summer solstice] (http://www.almanac.com/content/first-day-summer-2016-summer-solstice).

The new IDE is coming along. We may release an version that does not have 100% of the previous IDE’s features or we may wait until we have everything ported over.

It is a software estimate and we will revise more specific dates as we get closer.

Hehe, I was going by school scheduling.

That looks prety good, a needed update to complete the Unreal Engine 4 integration

Hey guys. I’ve just discovered SkookumScript but was bummed out to see there was no Mac IDE support. Is this still in the works and how is it coming along?

We are using the new IDE internally.

There are a few course edges and missing bits though it will be available for Windows PC soon.

All the work for the Windows version is applicable to the Mac and Linux IDE as well.

To get the Mac and Linux version of the IDE up and running we will have to write some file and socket systems that are currently Windows specific. As soon as we have a more specific ETA we will let you know.

Thanks for the reply. Really looking forward to getting into SkookumScript natively on my Mac.

One question, can I run the IDE in a Windows VM and work with SkookumScript on Unreal 4 on a Mac as a workaround?

We haven’t run the current SkookumIDE in something like Wine for a while.

We haven’t tried the new Slate based SkookumIDE in a Windows VM at all yet.

Either might just work or may need a tweak or two.

If you are willing to give us feedback we can try to help you out though we are prioritizing the last few features of the new IDE first.

The Mac binaries for the SkookumScript API and plugin are available via the Unreal Marketplace and from our GitHub repository. We have not been actively testing the Mac binaries with each release though they should work. 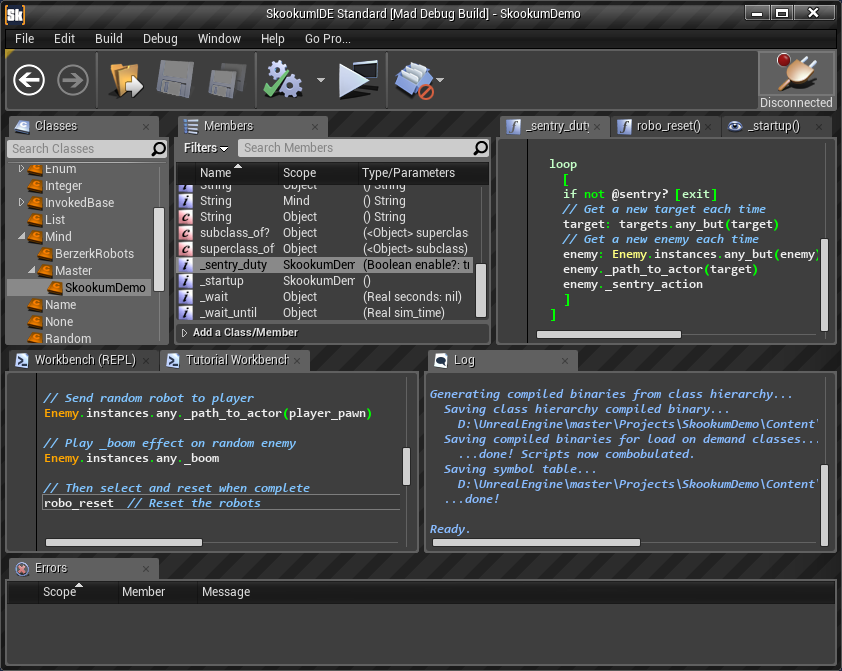 Would this allow the IDE to have plugins?

Would this allow the IDE to have plugins?

Not on day one, though that is the plan.

More and more parts of the IDE will be written in

itself which you will be able to modify and add to. Ideally this will also include C++ plugins.

Right now there is also a mechanism using the command-line which is a somewhat simplistic way to communicate with the SkookumIDE.

Thanks for all your patience!

The revamped SkookumIDE is available today.

It is still under development, though you can check it out immediately - get your hands on it here!

Just in time for Game Developers Conference 2017, here is the latest greatest release of the SkookumScript Unreal Engine 4 Plugin! So what’s new? The brand new SkookumIDE! [image] Our IDE went into metamorphosis and turned into a beautiful butterfly! Using Unreal Engine’s Slate UI system, we have redesigned it from the ground up for the sexiest, most superpowered workflow ever. And the good news is this new crown of game scripting UIs remains free for everybody in its Standard Edition. The Pro Edition is $99 until March 31, $199 after that. Check it out! You can get the Pro version using the “Go Pro…” button on the Standard version to upgrade or you can buy a SkookumIDE Professional license directly. [image] Here are the most notable features: Standard Edition live update of running game, even on consoles and mobile devices single-click compile/sync button auto parse (errors underlined with squiggly lines) full contextual autocomplete syntax highlighting lightning fast compilati…

As always, let us know if you have any questions!